Backups are useless without restores. I’ve written a few posts about Nagios, my current monitoring tool of choice. Included with Nagios are a number of plugins and you can even write your own plugins.

In this post, I’ll show you a shell script I wrote to make sure my backup files turn up where they should, when they should. In my case, these files are database backups, but the idea behind the script is applicable to any list of files you can collect.

I’ll show you have I keep the N latest backups on disk and let the system keep track of which one one to delete. By now, you should be thinking newsyslog.conf.

The background on my backups

I have a jail, dbclone, which has a single purpose: test every dump of every database by loading it. This ensures I have a backup and that it is functional.

This scripts which accomplish these tasks are triggered by crontab entries. The internals of those scripts aren’t important to the subject of this post.

Backups of your backups

I have a lot of disk space on this server. So much that I keep multiple copies on disk. I’ve just copied the database dump here. Why delete it immediately?

For each directory which contains a database dump, I create a subdirectory, old-backups. Each day, the recently rsync’d dump file is copied to this directory. Multiple copies of this file are retained by making use of newsyslog. More on that later.

Here is the script I use for copying the files to the old-backups directory:

Here is a crontab entry used to invoke the above script:

newsyslog is typically used for maintaining system logs to a manageable size. However, it can be used for any file you want. I use it for keeping copies of my incoming mail.

The configuration file (/etc/newsyslog.conf) allows for globbing of the file name, and the following entry will rotate all *.dump files in the specified directory.

Here is the script I created (it is also on github).

I won’t go into the details of a Nagios script, but in summary, the return codes are:

This script makes use of a Nagios plugin, check_file_age, which is installed by net-mgmt/nagios-plugins.

The following is a list of all the individual file checks I had before I wrote the above script: 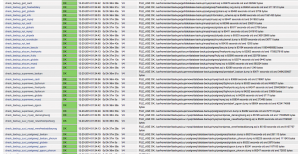 A list of the individual file checks for my backup files

The advantage to this single script is I can alter the files checked with a simple edit to the file references by LIST_OF_FILES.

The main disadvantage is the granularity of the monitoring. If five files go out of sync, I get only one alert, but I won’t see any updates until all five files sync up. If I had individual alerts, I would get one RECOVERY notice for each file.