At 4:30 on Thursday, August 30, Lynne and I headed north in her Honda Element, with two mountain bikes tucked into the back of the vehicle. Along for the ride was camping gear. We were head to North Carolina to ride at Tsali.

About an hour or two into the trip, we stopped at a service plaza to meet up with one of Lynne’s friends, Robin, who was travelling the other way with a load of polo ponies headed to southern Florida for the upcoming season.

We stayed overnight at Americas Best Value Inn-White Springs/ Lake City. This was nice and close to the trails we wanted to ride at Suwannee River. Yes, the river from the song. The motel was nice enough for the price. We slept well, got up early, had breakfast, and headed to the trails. We did the Bridge-to-Bridge trail. We decided to start at the boat ramp, just out of town. 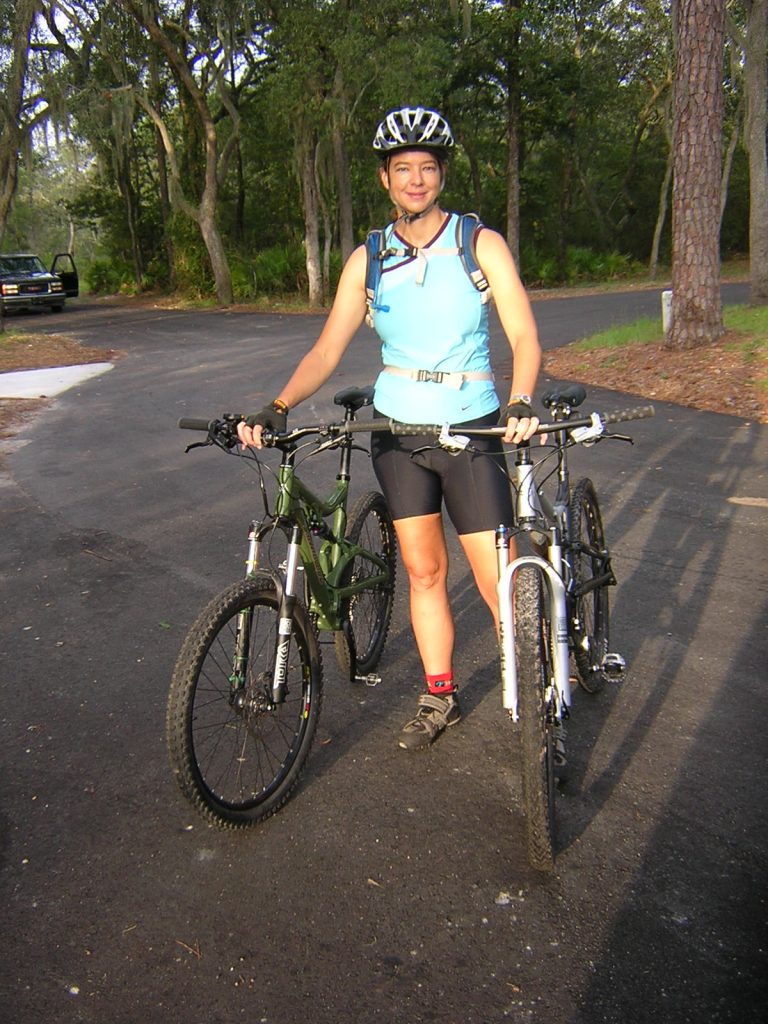 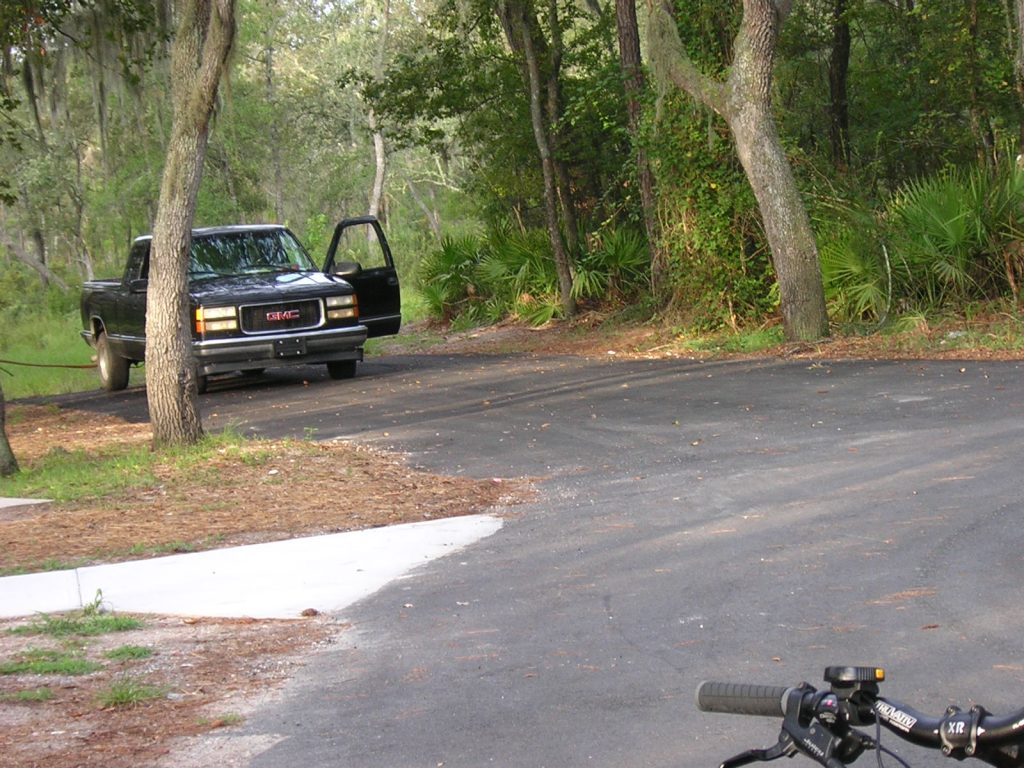 As we were unloading the bikes, another vehicle pulled into the area. This raised my concern because they didn’t do anything but pull into one of the spots. We took a photo of the vehicle before we headed off onto the trail. I forget the reason why, but we returned to our car for something, and found the guy just getting back into his vehicle. He then drove off. We figured it was a loo stop for him.

After completing what we returned for, we didn’t find the trail immediately. We wound up at a dead end, then we circled back to the car. On the third attempt, we found the trail by keeping left all the time. We knew were were on the right trail when we found the Slash Pine and Loblolly Pine information signs referred to by the map.

The trail was fun, not very technical, and flowed nicely. It was a good trail to do first thing in the morning before driving another two states north. The trail appeared largely unused. We saw no signs of other bikers, not even tracks. I kept riding through massive spider webs and the bike forks were covered in by what looked like cobwebs. At one point, my handle bars picked up a rather large hitchhiker. 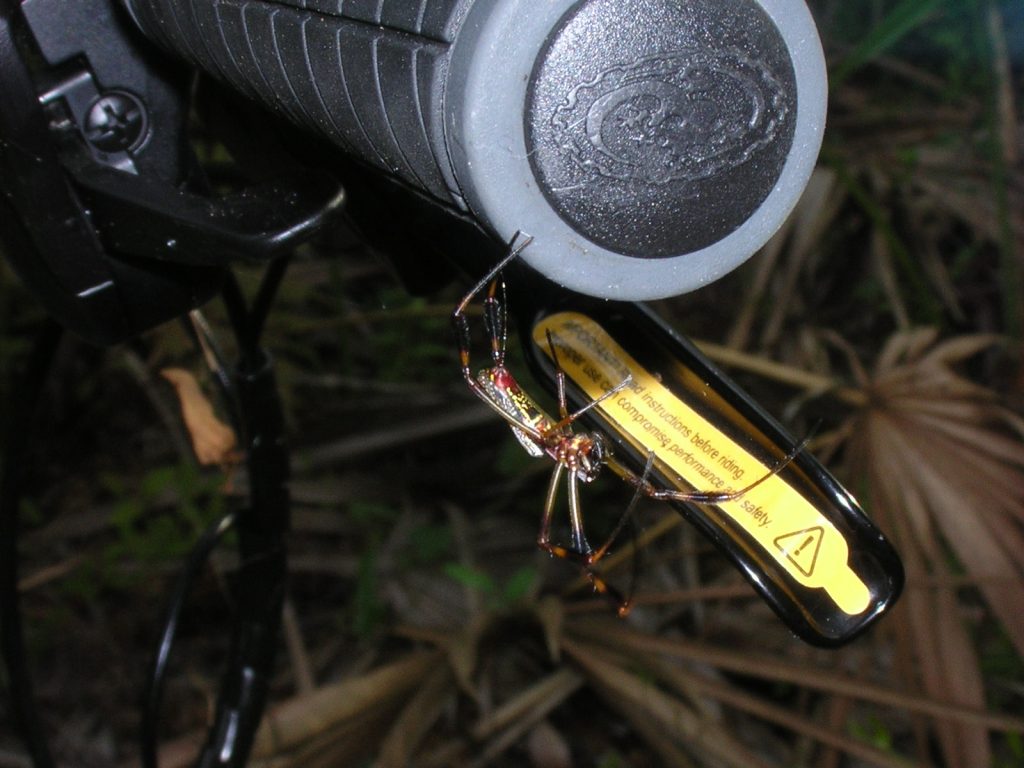 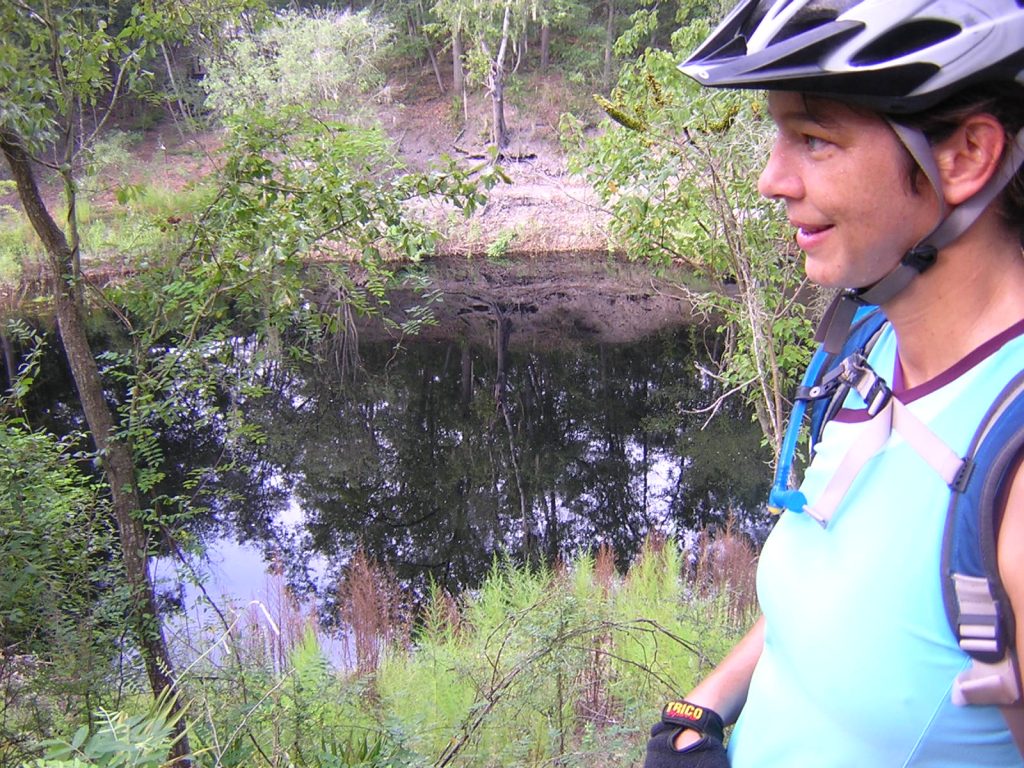 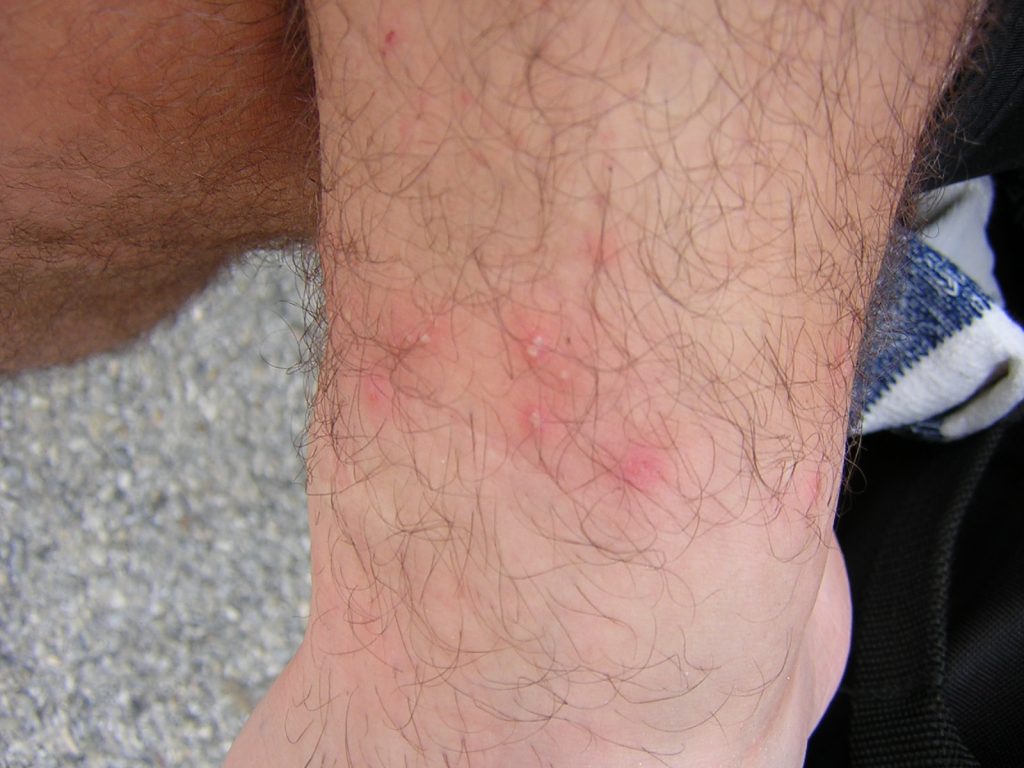 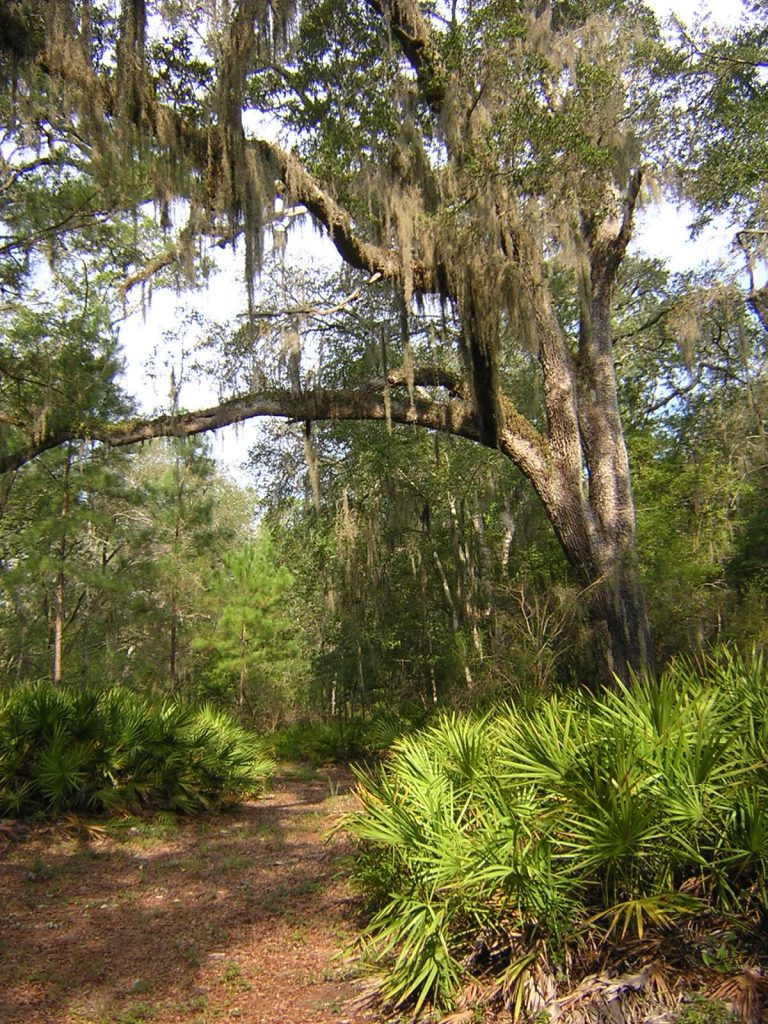 We stopped by the Suwannee River and took some photos. I started getting bitten on my right ankle. Fire ants said Lynne. Ouch. They hurt. And over the next few days, the little bites swelled up and got worse. It never kept me awake at night, or caused real pain, but I certainly didn’t like it.

Getting back to where we started wasn’t a problem. We just followed the trail and it led us right back to the boat ramp and the cars. The work team from the local incarceration center was just starting up. They were doing the yard work on the grass with lawn mowers and weed eaters.

It was back to the motel, shower, pack, and head out north again. South of Atlanta, on I-75, we found stopped traffic. We detoured through Conyers and spent about an hour getting back onto main highways. We arrived at Turkey Creek Campground in Almond, North Carolina, at about 8:30. This is a great little campground. Good showers. Nice sites. We’d camp there again if we go back to that area.

That night, as I waited outside the wash house for Lynne, a small boy and his mother came out of the wash house. He asked me what I was doing. I said I was waiting to catch some waffles. This led to a long running story, over several days. You see… Turkey Creek Campground has lots of waffles. You can catch them if you’re careful. I caught and skinned three of them on Friday night and had them for my breakfast on Saturday morning. The waffles run through the bush around the campground. If you listen carefully, you can hear them with their soft “waffle-waffle-waffle-waffle” sounds they make. They are very hard to catch though.

Saturday morning, I saw him again, and told him about the three I’d caught the night before. He said he’d caught one before too. He was asking people at various camp sites if they’d seen any waffles. Nobody had. The story spread around the campsite and eventually got back to people we’d told the story to. His parents said they’d tell him the truth, probably by the time he is 11. I think it’s a good story to tell his first serious girlfriend. 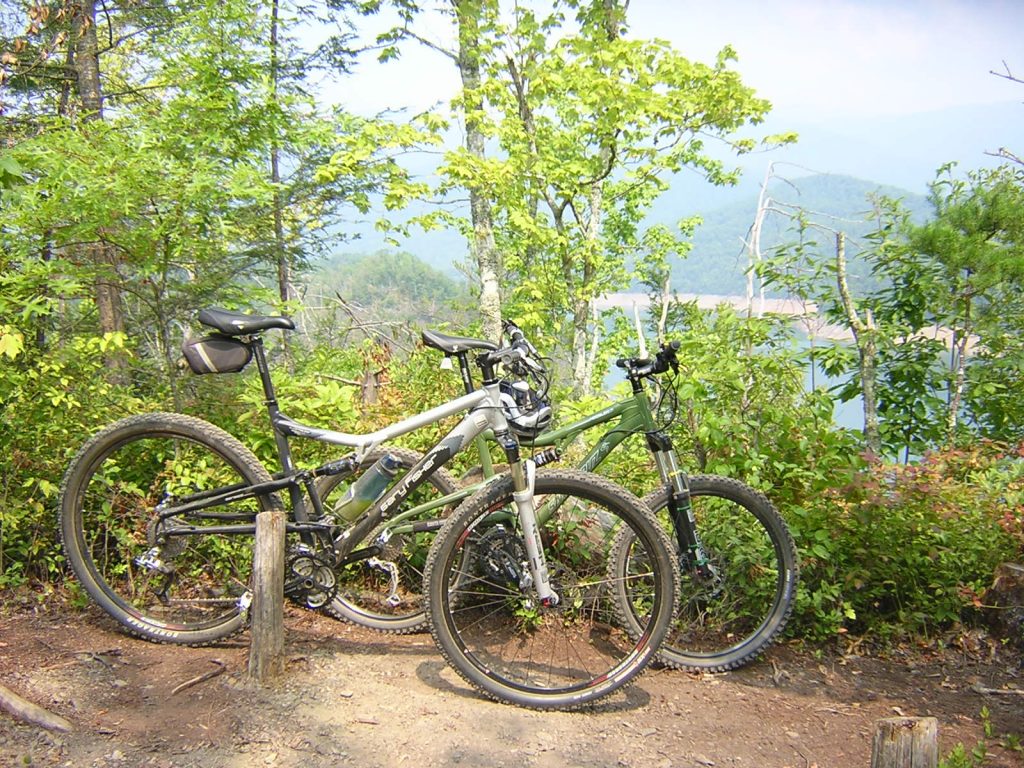 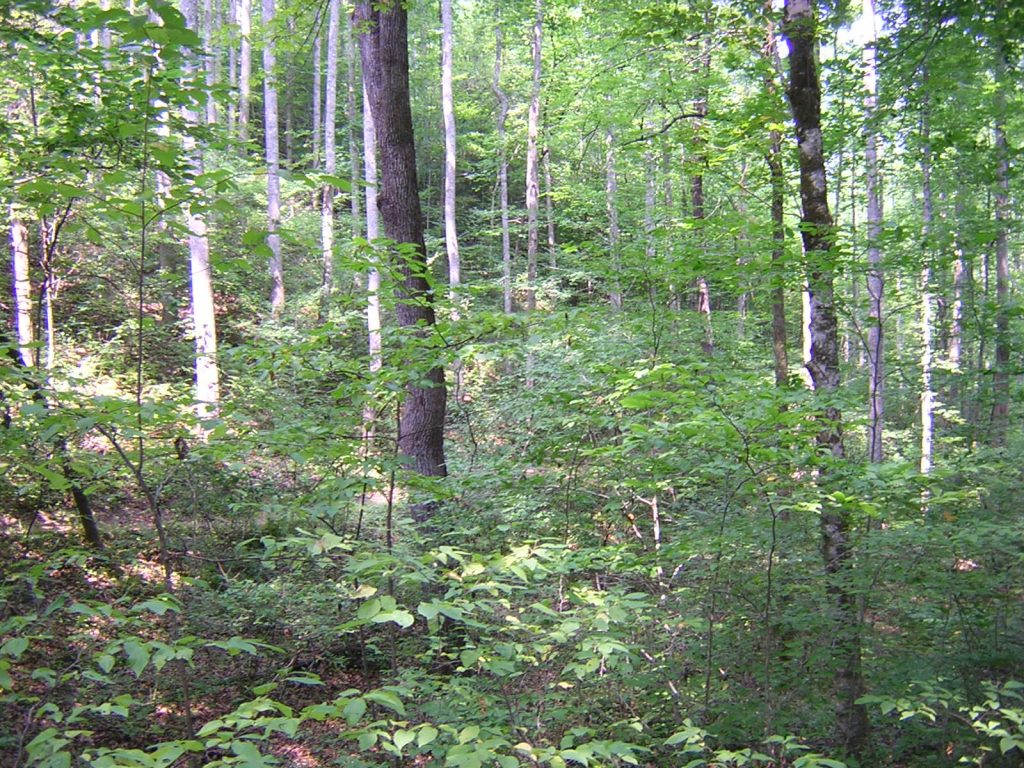 Story telling aside, we head to the Tsali trailhead. Turn right leaving the campground. It’s 2 or three miles up the road, and well sign posted. Keep going down the road. On Saturday, we did Thompson and Mouse. Travel the trails in the recommended direction to avoid head-on traffic. See the maps at the trail head for arrows.

Thompson had a great down hill to finish on, and left us back on the trails right near the trail head. We proceeded to do Mouse immediatlely afterwards. Both trails are good. Signage won’t let you get lost.

Saturday night, we had a feed of ravioli, visited with several other campers, and turned in at about 10pm. We got back to the trail head at about 8:30 and did the Left trail. It was great. There were three or four climbs that were harder than the previous day. This just wasn’t because we were on our second day of riding. These were steeper inclines and looser rocks. It was climbable for those inclined to do so. But short enough to not be a hard slog if you wanted to walk up. The downhills today were great.

One thing to note on the Left loop. This becomes clear if you closely study the map befor heading out, but isn’t clear on the trail. At one point, you will be climbing and see a “one way – do not enter” on the left. This is the end of the overlook loop. If you choose to do the loop, and I recommend that you do, you will be coming back up this climb from that point. When you do, remember to turn right and climb again. 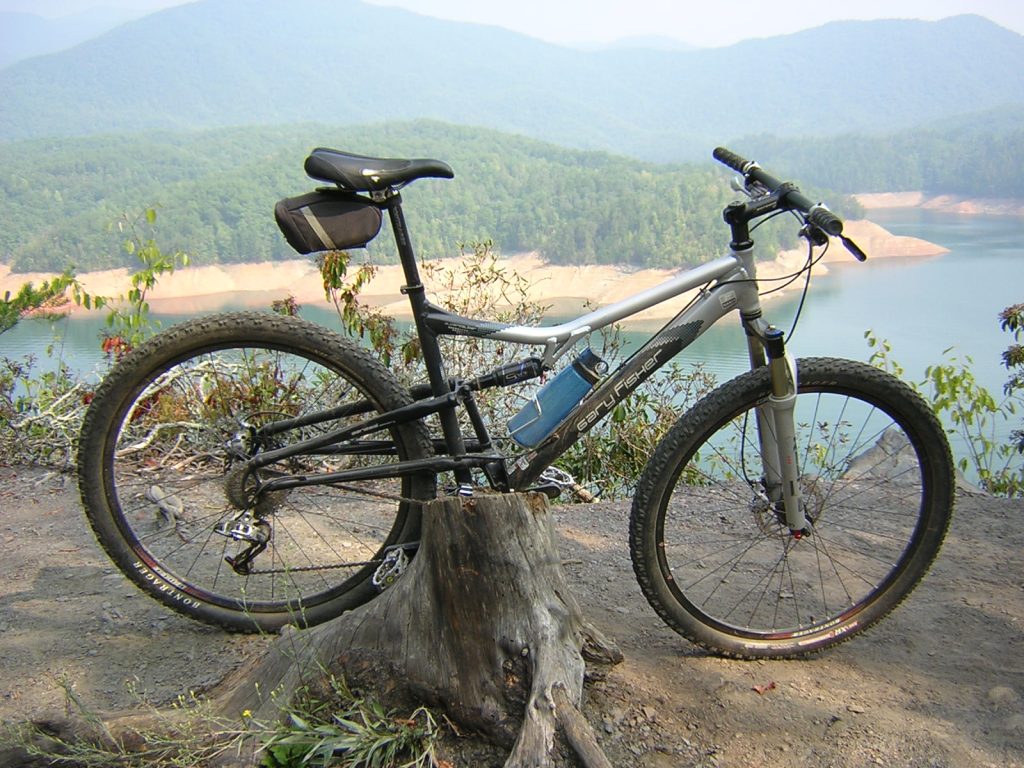 When you do get to a left hand turn that refers to the overlook loop, remember that you will be going counter-clockwise around the look out loop. The main Left trail goes clockwise. The overlook loop is counter clockwise.

The Left (clockwise) and Right (counter clockwise) loops share a central trail (County Line Road). We took this back to the trail head. This is a fast downhill mostly on gravel. But to get to it, you need to do a good climb first.

After filling up on lunch, we headed back out to do the Left trail. About 1000 yards in, I fell. I don’t really know what happened. I think the front wheel slid out. It was really a nothing part of the trail. I went over the bike and rolled, and stood up. My right leg hurt. I pull up the leg of my shorts and found a puncture wound with bits hanging out. I put pressure on it and sat down to wait for Lynne. I showed her the wound, and blood ran down my leg as I did.

The wound was just a simple laceration. It was not a puncture. What I saw was tissue distorted by the fall. The blood that ran down my leg when I showed the wound to Lynne was just pooled blood that accumulated when I put pressure on it. There was no bleeding to stop. But at the time, we thought it was a serious injury. I kept pressure on the wound while Lynne got out my first aid kit and prepared a dressing. When it was ready, I removed my glove expecting blood to be pouring out. It didn’t. We started feeling better about the injury and decided that I could make my own way out. A gauze dressing was applied, with a rolled up bandana as a pressure pad, with another bandana holding it in place. I rode out, mostly with one leg. 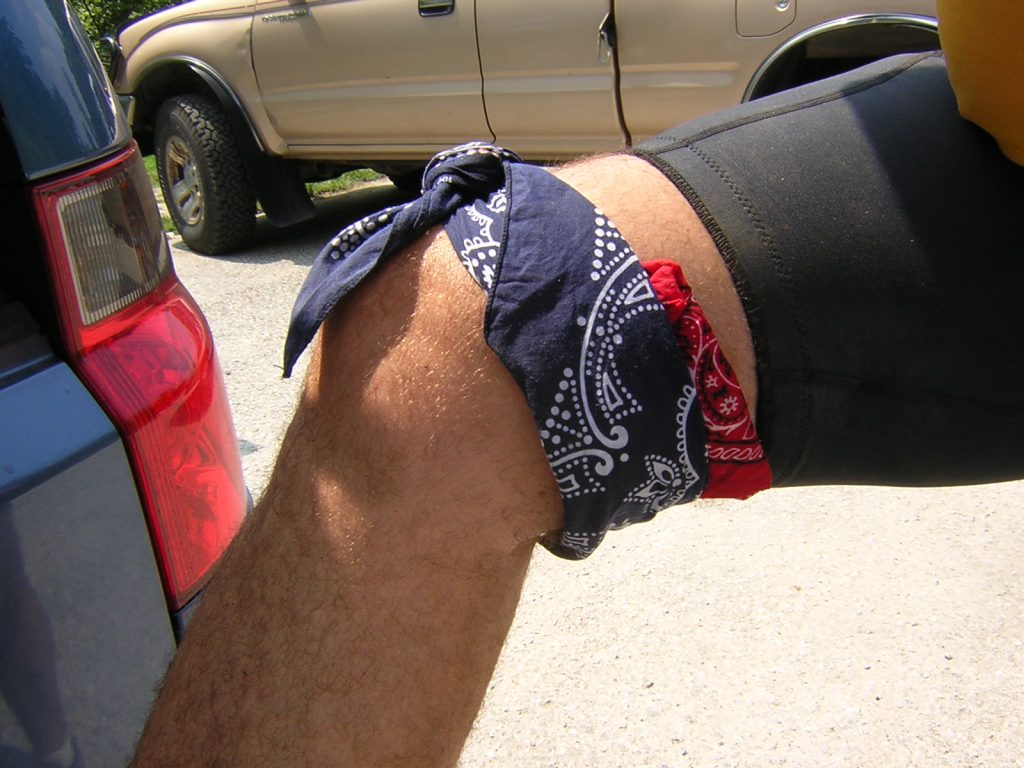 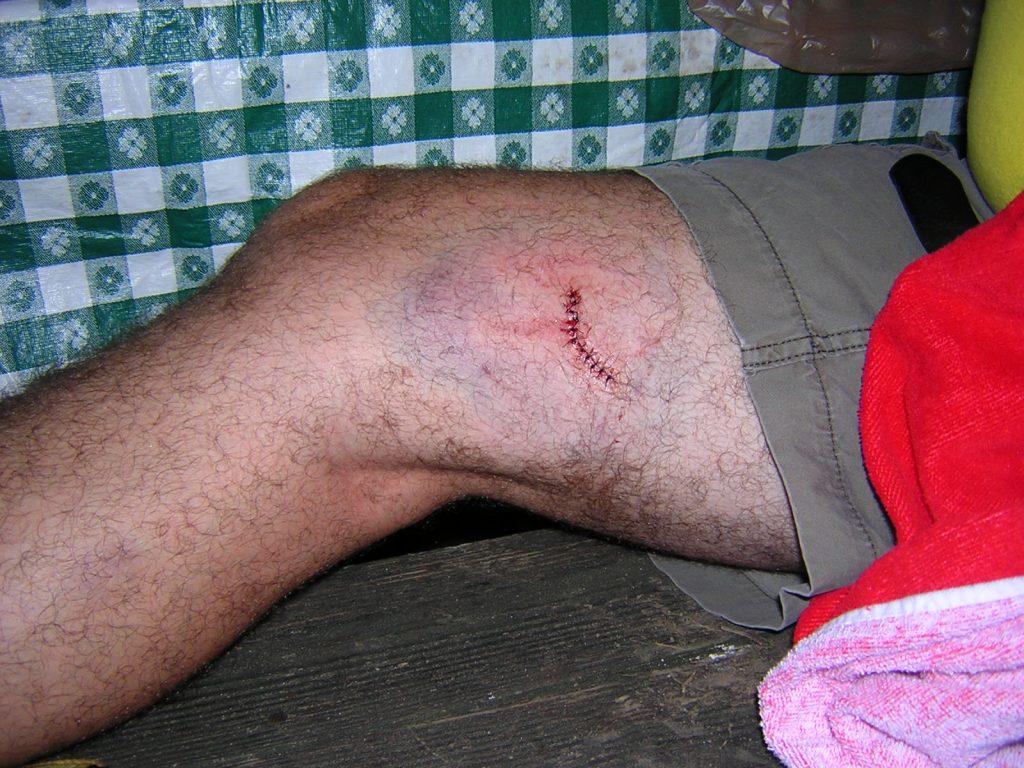 Changing the dressing that night 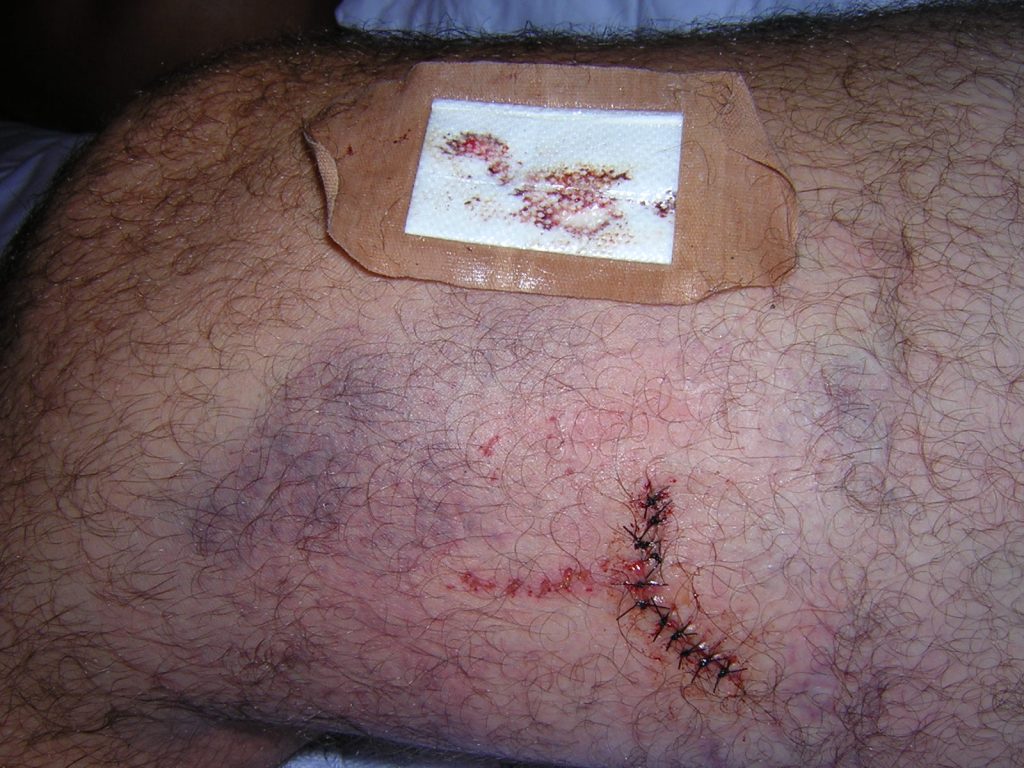 We visited the emergency hospital of the Swain County Hospital. The wound was cleaned. Laticane(?) was applied to dull the wound for more cleaning and later stitching. More cleaning was done. Eleven stitches were applied. The pain was pretty low.

I thought we had a photo of the injury, but we wound up with a video of it instead.

I’m sure I’ll be getting a bill later. The stitches are to be removed in 7 days.

Here is what it looked like last night (Monday, 3 Sept) when the dressing was last changed. The removed dressing is above the wound, showing how much seepage here was in the previous 24 hours.

I think it’s healing up nicely. The knee is quite swollen, as to be expected. I went for a walk this morning. I’ll keep exercising it like that, several times a day, to keep things moving. The doctor said no strenuous activity for 4 days. So I should be able to bike again on the weekend. ;)

One Response to “Trail riding, fire ants, and stitches”