We had our weekly Pennypack Park ride tonight. Sixteen people turned up. In all we had several new faces and lots of regulars all converging on the best single track inside Philadelphia city boundaries. I arrived about 5:45 after picking up my bike from Guy’s. It had a new cluster and was finely tuned for good shifting.

In the parking lot as I prepared for the ride, I recalled mentioning to Dimitri on the Monday night ride in the Wissahickon that I thought my seat could come up 1/4″ or so. I had new shoes and I noticed my spin wasn’t quite the same. Out came the tools, seat bolt loosened, seat post adjusted, bolt tightened. Check. No, perhaps a little higher. Loosen. adjust, tighten.

A broken seat bolt. There goes my riding for the night.

Doug offered up a spare bolt, but it was the wrong size. Jacalyn looked in her trunk for parts. Nothing.

And tape. And tape some more. 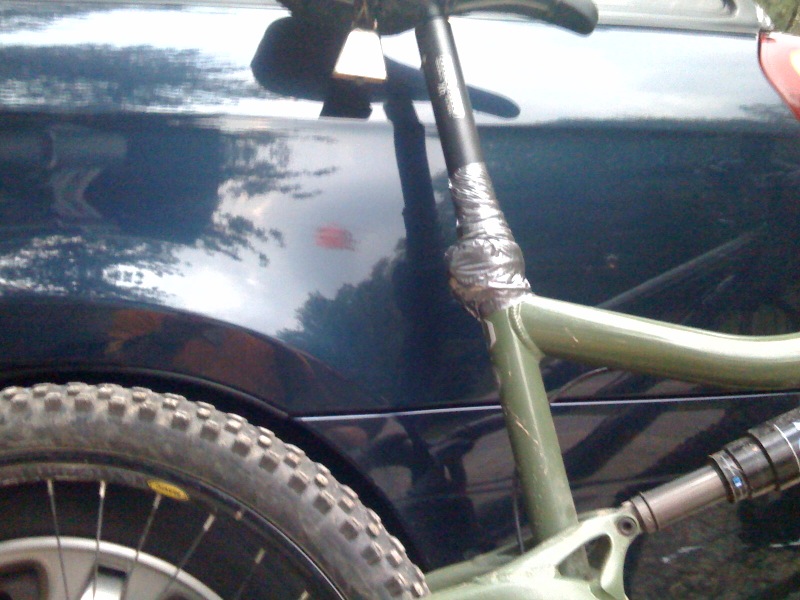 Jacalyn took off with her group of 5. I left with my group of 7. We left John behind with the 4.

I rode very lightly on my saddle. I kept expecting it to slip. It did not. It didn’t move at all from what I could tell. It was at a very good height for me.

I must mention my endo. Whitney was right behind me. I noticed the coiled vine on the right hand side of the track. I’ve seen it numerous times. This time, it reached out and grapped me. It looped around my right foot. I felt it take hold. I figured, OK, maybe I can ride through this…

My right foot was taken high up into the air. It wound up about 4 ft off the ground said Whitney. Bang! Down I went on my left knee. Very fast. Very hard. It hurt. A lot.

I got up, gathered the bike, took out my clippers, and Whitney cut off the vine near ground level and we tossed it aside. Clippers placed back into the pack and off we went. The knee still hurt. At the next stop-and-wait session, I noticed the blood. \o/

The knee had stopped throbbing. By the time a thorny vine tore across it, I’d almost fogotten about the pain.

The rest of the trip was without incident. Luke had a good fall, and twisted his handlebars around. When we turned around to heast back north, he kept going south towards his place. Then we were 6.

7 of us went to Tonelli’s for a post ride feast.

All in all, a very good ride, despite the broken gear.