I started replacing 3TB drives with 5TB drives in a 10 drive raidz3 array on a FreeBSD 10.3 box. I was not sure which drive tray to pull, so I powered off the server, and, one by one, pulled the drive tray, photographed it, and reinserted the drive tray.

No changes were made.

Upon powering up, I was greeted by this (I have typed out the text for search purposes): 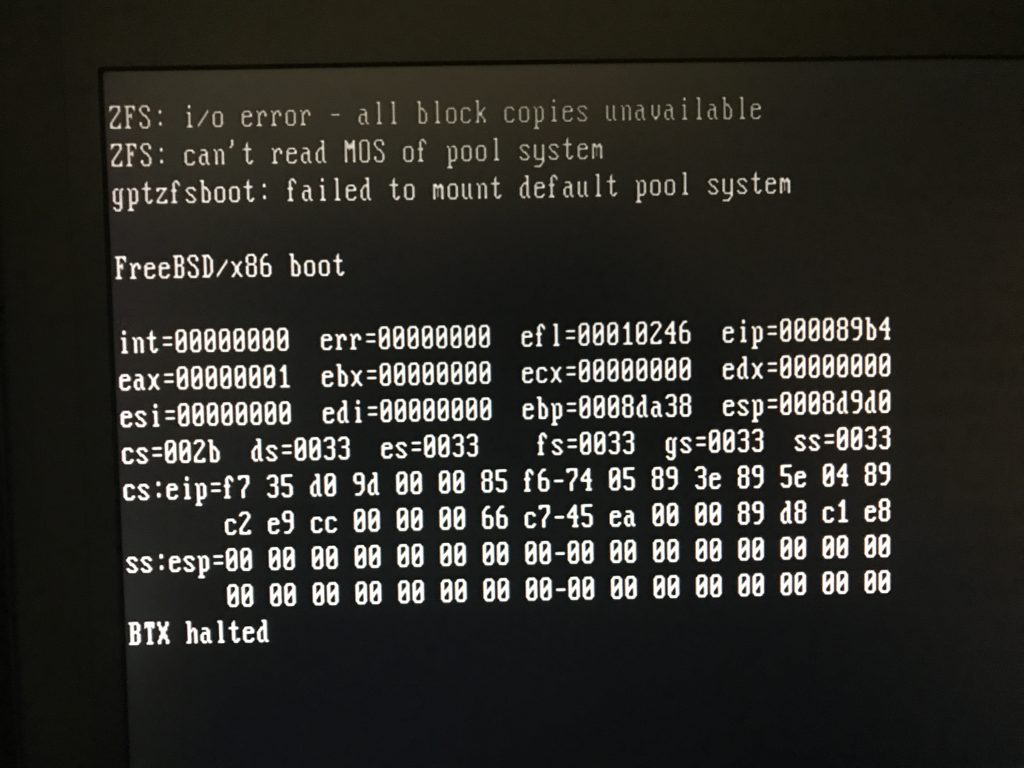 My first instinct was: I know I ran gpart bootcode.

The device which was replaced was the first one listed in zpool status of the bootable zpool, specifically, da2p3 as shown in this output taken prior to the zpool replace command being issued.

I rebooted the box, and went into the HBA bios. I set all HBA bootable. Previously only one HBA was bootable. The next reboot result was slightly different. All 21 drives were reported by the HBA BIOS.

It seems to me that the boot process got farther, but then failed again. The main difference is the inclusion of the can’t find root filesystem message and it is at the boot: prompt, not BTX halted. 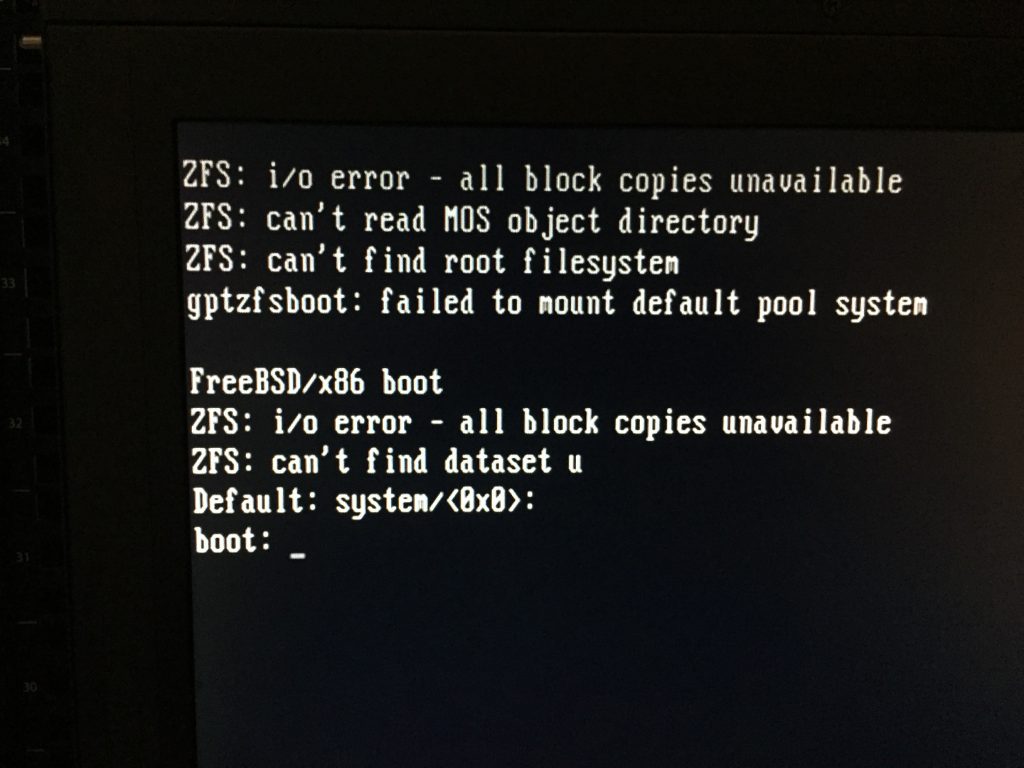 Move new drive to where old drive was

My next thought: move the new 5TB drive to where the original 3TB drive was located.

At the same time, I added a new 5TB drive into the internal space of the box (where the first 5TB drive was originally installed, but this time, attached to the motherboard, not to the HBA).

What happened? Why did I have to move the new drive into a specific drive bay?

I let Josh Paetzel read the above. He and I chatted about the potential problems.

Any incorrect information below is my failure to correctly interpret what Josh told me.

In short, booting from HBAs can be tricky. They sometimes lie to the BIOS. They try to keep their SAS infrastructure a certain way (I don’t know enough about this to properly discuss it).

Once you have set up a raidz system, it is a very good idea to follow this procedure to test booting:

Repeat that until you have booted with each drive removed in turn.

Or, you could boot from non-raidz drives, such as a hardware mirror, or a ZFS-mirror, or a CD-ROM, or UFS drives.

Yes, we’ll hear from people who say this is precisely why they boot from UFS and then attach ZFS.

I will continue with my drive replacements. The issue is hardware, not ZFS.

When all the 3TB drives have been replaced with 5TB drives, I may try booting from this SSD mirror zpool instead:

That 8GB partition is used by the system pool as a log.

The 439G partition was used as a tape spooling location, but that tape library is now on my R610 server. I can delete that.

What I may try is creating a dedicated boot zpool, such as Glen Barber did.

1 thought on “After replacing 3TB drive with 5TB drive, FreeBSD 10.3 system did not reboot”

Like what I do? As an Amazon Associate I earn from qualifying purchases.Want a good read? Please try: FreeBSD Mastery: Jails (IT Mastery Book 15)