I have obtained a Dell R720 containing 10 x 400GB SSDs. The drives are connected to a RAID controller (H710P) which cannot do JBOD / IT mode. This means the drives are effectively hidden from ZFS, which is never good.

This post describes past work and future plans for this server as I get it ready to be a general purpose server running FreeBSD and providing multiple services, including:

Yeah, that’s a lot of stuff and varied workloads.

Last night I upgraded the iDRAC, and live tweeted it. From racking (6:16 PM) to final firmware upgrade (11:23 PM) was about 5 hours. Some of that was opening and closing the case and waiting for upgrade to fail and then try again.

During the racking and upgrading process, I took photos. There are often long periods of waiting. Much of this I could have done from the comfort of my desk, but instead, I was in the basement because the remote console did not work. It is work now, after the upgrade. Lovely timing. 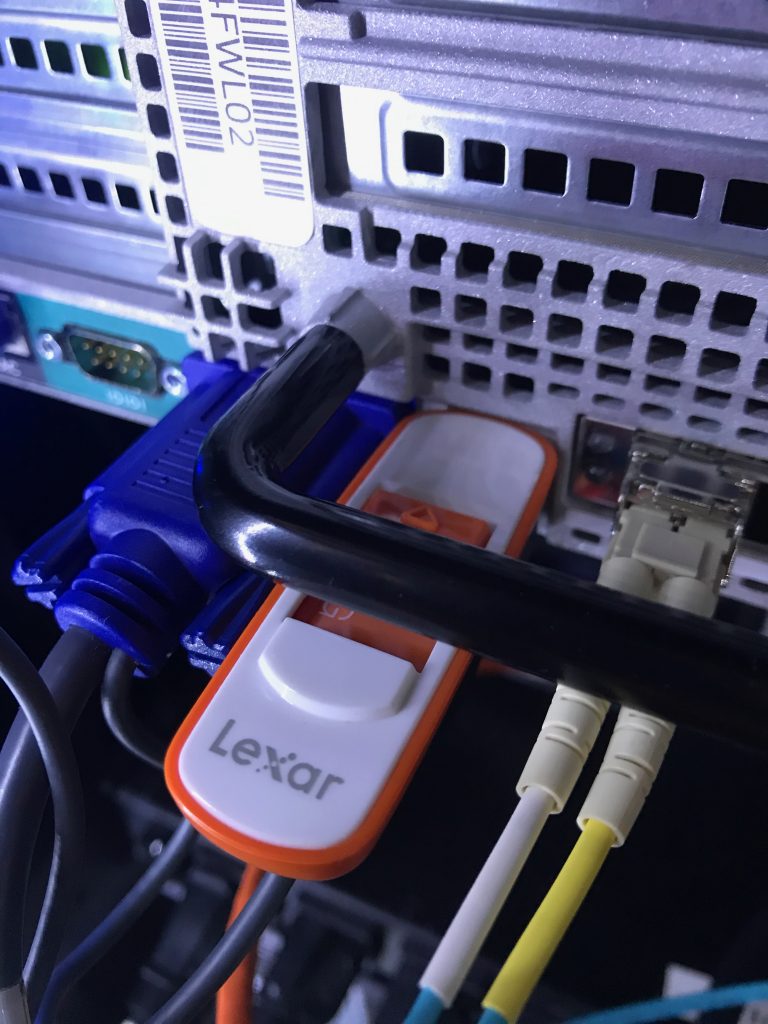 I burned this installer thumbdrive last night and plugged it into the back of the system. 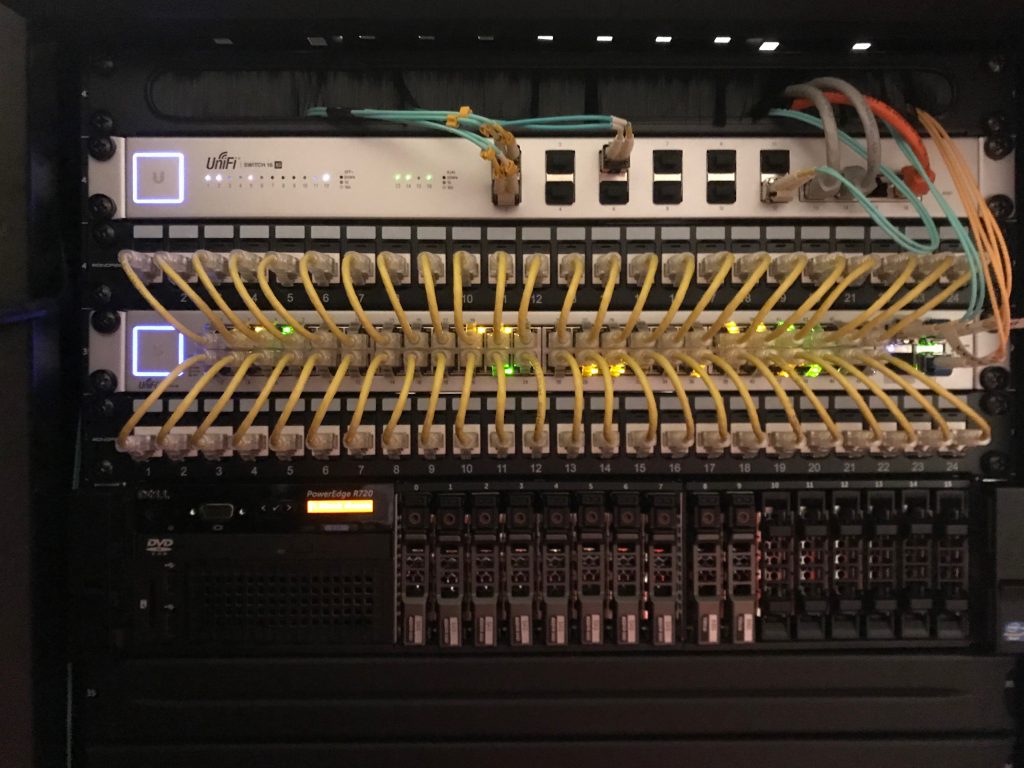 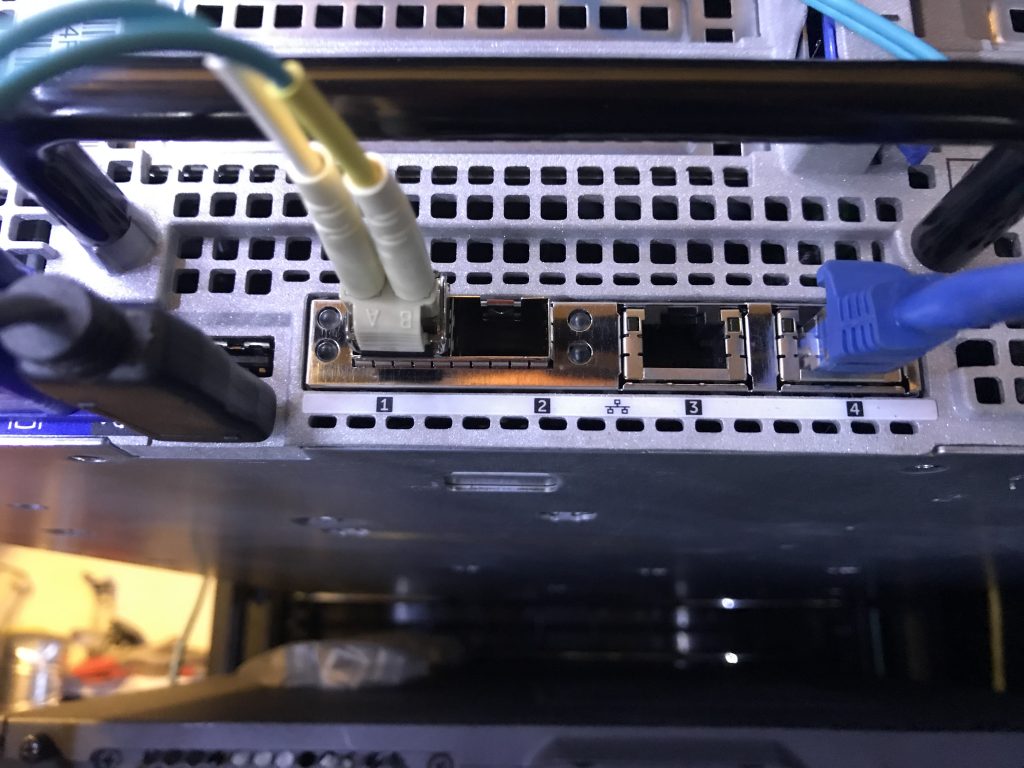 R720 network card
I connected both fiber and a network cable to this system because I wasn’t sure that the fiber optics would work.
Today I see that both are active. 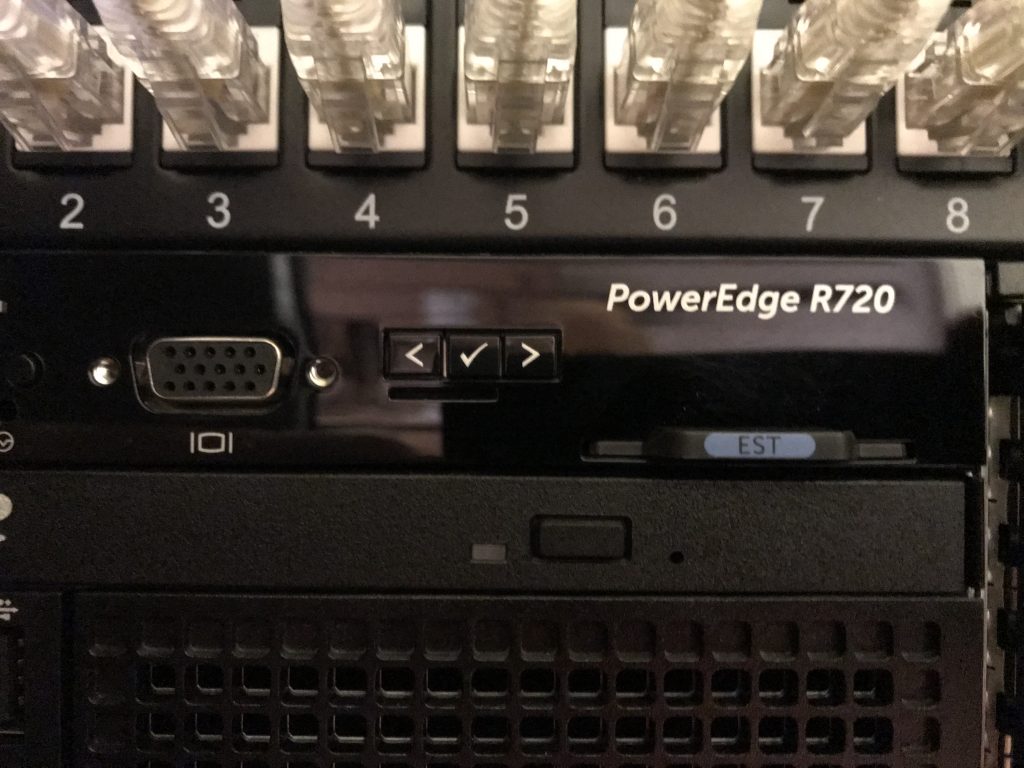 The front panel of the Dell R720 does look sharp.

RAID cards should not be used with ZFS. Instead, you want an HBA. If you’re looking for an HBA for ZFS, the FreeNAS community is a leading source of information. They have a wealth of knowledge and consulting their mailing list / forum archives is a good place to start. Search for FreeNAS and the name of your controller. They’ll tell you.

For example, mine is a Perc H710P (that is a PDF link). The search results tell me that is does not do JBOD, which is what you want for ZFS.

Booting from the FreeBSD install thumbdrive

I booted the system from the thumbdrive. Accessing the system via the remote console, I looked around via ifconfig and /var/run/dmesg.boot. I could see the NICs were up and working. The SAS controller was found. All looked good.

I tried to bring up sshd, but that failed because the FreeBSD install drive creates a read-only filesystem. sshd cannot start because it cannot ready the keys it needs.

This is where I moved to fmsBSD, something I have used many times in the past. With mfBSD, sshd can be easily started and you can login and look around. I find an ssh session to be easier to copy/paste stuff when looking around the system.

The Virtual Client Console, or remote console, which the Dell iDRAC provides, has an interesting and useful feature: Next Boot.

Selecting Next Boot for the Dell R720

The beauty of this is you can select BIOS or LifeCycle Controller. You don’t have to wait and press F2 or F11. You just select, and reboot, and come back at your leisure.

I set that to be the USB thumbdrive and booted.

After the system finished booting, this is where I was stuck: /boot/config: -D and BIOS Drive C: is disk0 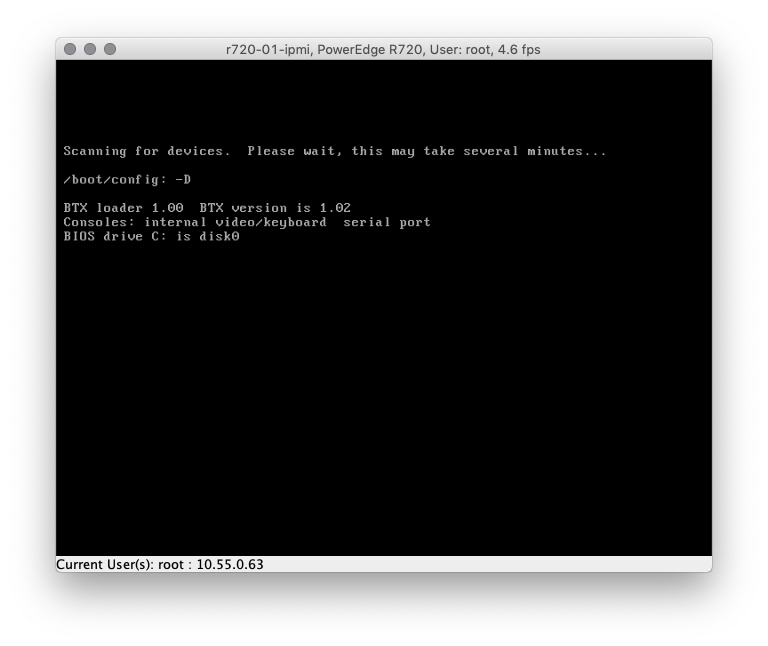 This is where my boot stopped.

These are the things I need to do before installing the OS.

The system holds 16 2.5″ drives (either SAS or SATA). 10 drives are installed and there are 6 slots which need drive cages.

The Dell R720 came with an H710P mini SAS card, which is not appropriate for ZFS. I found a SAS 9207-8i in my stash and installed it into one of the riser slots. 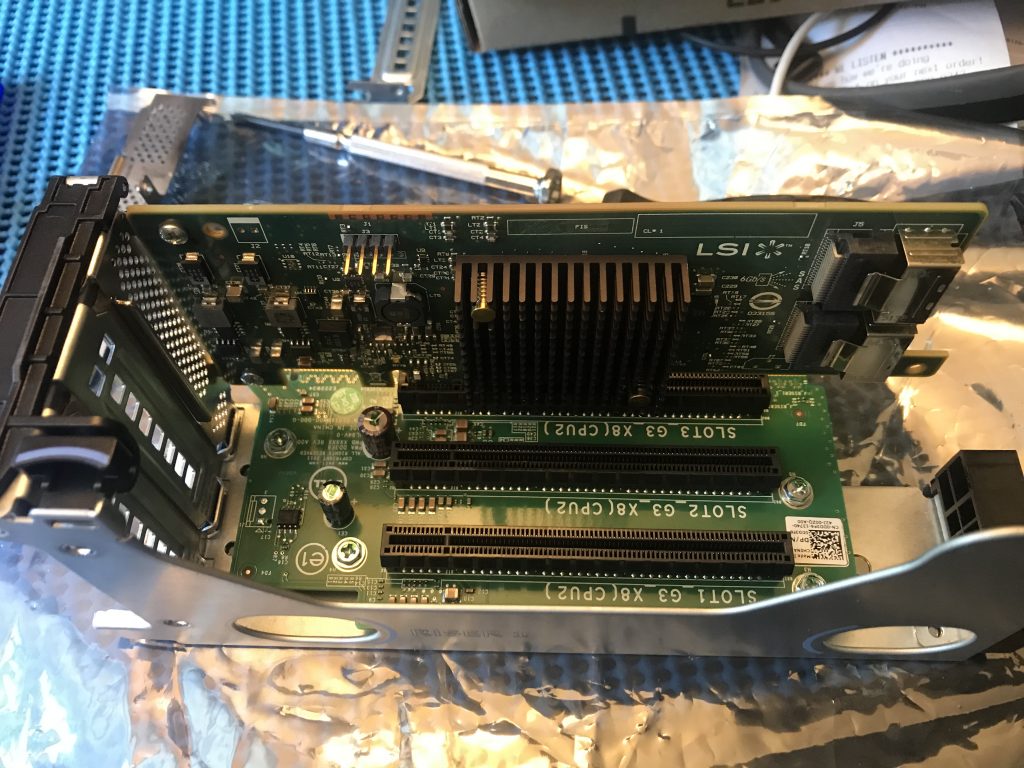 I want to inspect what FreeBSD fins for this card, to ensure it is in IT mode, not IR mode. That’s why I’m trying to get this box booted from mfsBSD. 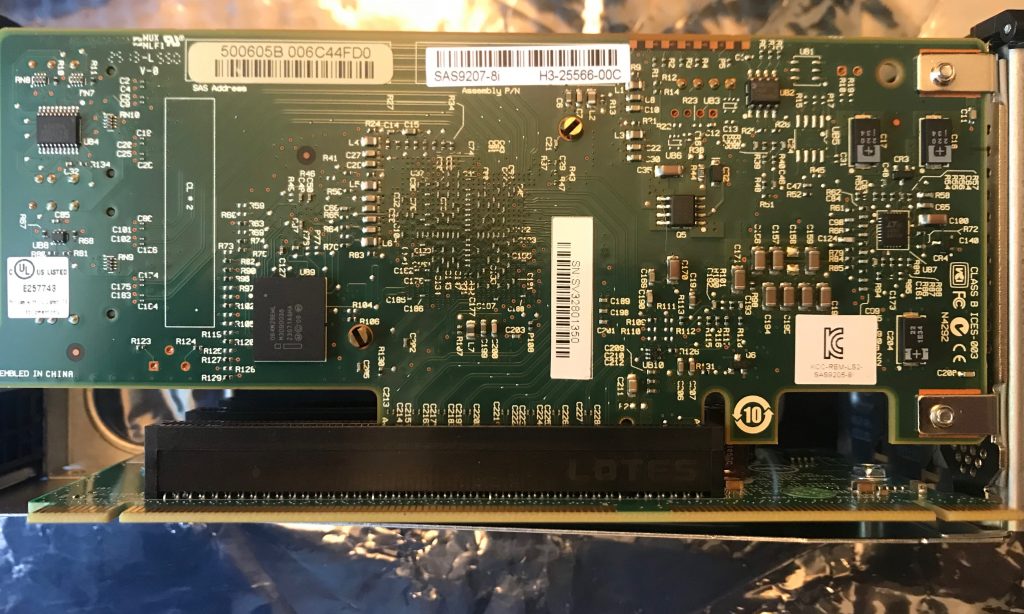 I prefer to boot from a mirrored pair of ZFS drives. I plan to use a pair of SSDS connected via PCIE slots, and avoid the HBA. This leaves all front-facing slots for data drives.

I found The ZFS ZIL and SLOG Demystified to be a good read on this topic.

With a SLOG, I can reduce the wear and tear on the man SSDs. Every synchronous update gets written twice:

For most situations, this isn’t an issue. I’m going to do it because I can.

I can combine the above mentioned four drives into two drives.

The ZIL can use a relatively small partition on the drives. The OS can have some. The rest would be empty.

For example, let’s say we get a pair of 500GB SSDs. The OS could have the first 20GB of that. The SLOG could have the next 10GB. The rest of the drive would be unused. This is referred to as over-provisioning. The theory is that the SSD wear levleing algorithm will spread the data over the entire flash memory.

I have not decided if I’ll use two or four SSDs here.

The existing SSL certificate on iDRAC needs to be replaced. It is expired and for a different host name. I have tried to create a CSR but the downloaded file is empty.

fix the System Board Intrusion Chassis is open message

This message always appears. I think it can be disabled.

After an IRC discussion on #FreeNAS, I saved some notes in a gist.